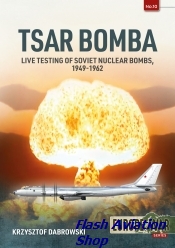 Description : On 30 October 1961, the Union of Soviet Socialist Republics (USSR/Soviet Union) conducted a live test of the most powerful nuclear weapon ever created. Codenamed Ivan, and known in the West as the Tsar Bomba, the RDS-202 hydrogen bomb was detonated at th